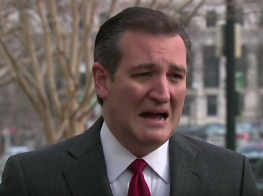 March 24, 2016  This week Ted Cruzs super-pac stooped low again by, this time, sending out photos of Donald
Trumps wife. In his usual manner, Cruz has hidden behind his super-pac in an its them, not me fashion. The photo
used was an old photo of Melania Trump posing for GQ magazine. While there photo was risqué, there was no
nudity. Cruzs political strategy was to show himself as being of superior moral character for the Presidency, however
backfired as a twitter war between himself and Donald Trump erupted. While touting himself as a person of moral
fiber, Cruz has been dogged in recent months for questionable tactics and flipping on issues.

During the Iowa caucuses former candidate Ben Carson announced he was returning home for fresh clothes and
then shortly afterward clarified to supporters that he was still in the race. Cruz seized upon the opportunity to tweet
that Carson was leaving for home and had a huge announcement in a few days. The tweet by Cruz was found to be
totally false and contrived by Ted Cruzs campaign. Later Cruz apologized, but only after the dirt was done.

Throughout the campaign Ted Cruz has lost credibility with many by flipping on issues that he has sternly criticized
Donald Trump for. The first being that the U.S. should build a strong wall to protect the southern border from illegal
aliens, drug traffickers, human traffickers, and terrorists. Cruz through much of the campaign warred against Trump, even hinting that Trump is racist. However, over the past four weeks Ted Cruz has been stumping on the idea himself at campaign events, leading to questions of his credibility and viability as a candidate.

On the subject of putting a temporary halt on immigration, which Trump called for immediately after the California terrorist attacks, Cruz initially called it damaging to American values. However, again, Ted Cruz has flip-flopped on the issue and is now calling for the same.

When Donald Trump suggested using the best technical personnel to shut down the internet in the Middle-East that ISIS uses, Cruz cited first amendment concerns, which do not apply to other countries. Following Trumps proposal Cruz was sternly against the idea. However, here of late Cruz has again flipped on the issue and is now for it.

In light of the problems Ted Cruz is having with his candidacy, many pundits are wondering if he is still a viable candidate for President, much less for the Senate. Some suggestions have hinted at Cruz being suitable for the Supreme Court, however given his string of flip-flops on issues, some question the rationality of having Cruz in such a crucial position.

As the 2016 campaign season wears on, career politicians are proving their willingness to do anything for power. Recent polls for Cruz appear to be worse than before, again leading to questions of his viability as a serious political candidate for any office.