The Lomax Report
www.lomaxreport.com
News, Information and Items of Interest
For The Common Sense American

December 13, 2013  The Obama Administration has admittedly abandoned Americans imprisoned in . Secretary of State John Kerry told congress that the administration deliberately omitted called for the release of several Americans, including Saeed Abedini, so as not to muddy up the waters during negotiations with Iran. The government has been in talks with seeking a way to allow to have nuclear power plants without the ability to manufacture nuclear weapons.

Several American citizens have been imprisoned in for years. Some of those are imprisoned for being of a non-islamic faith, specifically Christianity, and others for political reasons. One that the Obama administration has raised concerns over is a private investigator, now known to be free-lancing for the CIA, gathering intelligence in . However others have been abandoned by the government.

Christian Pastor and American Citizen Saeed Abedini made several trips to , working on setting up orphanages there. He had had contact with underground Christian churches while there and was subsequently arrested by the Iranian government. After a muslim trial he was convicted of subversive actions toward the government because of his Christian faith. Abedini is of Iranian decent and converted from islam to Christianity. He has since become a pastor. His wife has made appeals to the Obama administration to no avail. She has also testified before the congress regarding her husbands imprisonment. She stated in interviews that she knew she would be battling the Iranian government, but did not imagine having to battle the government.

The for Law and Justice  ACLJ  has been very active in the case. You can read more at www.aclj.org. Around the world those of the Christian faith have face increasing onslaughts from muslims because of their faith. Billed by presidents G.W. Bush and Barak Obama as a peaceful religion, islam has proven to be anything but.

Over the years extremist, Leftist organizations such as the Southern Poverty Law Center  SPLC  have regarded those who have concern over islam as being persons of concern for the government. Even training manuals from the government and military training courses have labeled Christians as people of concern and potential terrorists. Those having patriotic feelings for are also listed as those of concern. My how things have changed in the past fifty years. 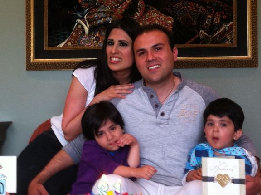