June 3, 2016  While continuing her criticism of Donald Trumps tone, Democratic candidate Hillary Clinton has begun an angry tone of calling Trump temperamentally unfit to be President of the United States. While tossing about a tirade of insults at Trump she continued by insinuating that Trump having access to nuclear codes as President would be unsafe. While not acknowledging the checks and balances of the nuclear code plan, Clinton has spun the piece in an effort to gain ground that she is losing in California.

Recent polls show that Senator Bernie Sanders is running neck in neck with Clinton in California, and Sanders has not given any sign that he intends to drop out of the race. Disarray within the Democrat party has seen Debbie Wasserman coming under fire, being accused of slanting her office as DNC chair in favor of Hillary Clinton. Early in the campaign Wasserman voiced support for the Clinton camp, instead of remaining neutral in the race. Vice DNC Chair Tulsi Gabbard resigned in the aftermath, refusing to tow the party line without question. As with Bill Clinton's campaign, it appears that there will be damage following the path of Clinton in her effort to win the presidency.

Many on the Democratic side are increasingly concerned at Hillary Clinton's angry tone and other have voice that they will be crossing the party lines to vote for Trump in an effort to save the economy and bring jobs back to America. 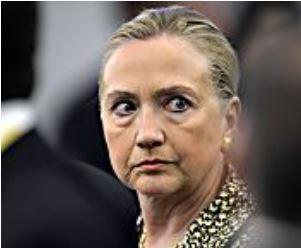