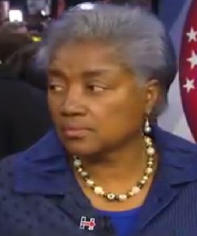 October 24, 2016  Today reports surfaced confirming the legitimacy of emails from Donna Brazile, tipping Hillary Clinton to questions to be asked at a Town Hall campaign event. Brazile, who became the DNC head after Debbie Wasserman was ousted because of corruption, is now found to be using the same tactics of corruption in helping the struggling Clinton Campaign. After strongly denying the legitimacy of the emails, tech gurus went to work and within five minutes found that Donna Brazile was lying and that the emails were definitely from her.

The DNC and the Clinton campaign have used corrupt tactics throughout the campaign season. Recent leaked emails revealed that the DNC conspired with extremist groups to incite violence at Donald Trumps campaign rallies. Questions have swirled around the Clinton campaign after a staffer, who was believed to be leaking information on corruption, was found shot to death in the streets while walking home.
More on this article